His Eminence Dr. Madhu Krishan,Conferred The Doctorate Degree Upon H.I.H The Grand Prince Jeffery I, Rex-Imp.

His Eminence Dr. Madhu Krishan,Conferred The Doctorate Degree Upon H.I.H The Grand Prince Jeffery I, Rex-Imp.

His Eminence Most Rev. Dr. Madhu Krishan, The Founder & Chairman Of "Academy Of Universal Global Peace" Upon the Recommendation of the World Governing Council Of AUGP & on the basis of the Resolution passed by The International Management Board Of Governors Of AUGP, Conferred The Degree Of "Doctor Of Divinity & Harmonious Civilization" Upon His Sovereign Imperial Highness The Grand Prince Jeffery I, Rex-Imp., 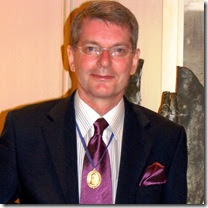 His Imperial Sovereign Highness Grand Prince Jeffery I, Absolute Monarch of the Imperial Grand Sovereign Principality of Sezibwan, Supreme Head of the Imperial Church of Sezibwan, Grand Prior of All England and Ambassador to the Knights King Christ, is an internationally recognised Patron of Good Works. He is one among the most knowledgeable and educated people in the World. He lives simply and modestly. Preferring to see all of his various incomes go to assist His University and it’s Foundation, in their works of providing free doctoral education for doctors and teachers, where they are most needed in their own locality. He also funds construction of clinics and schools. He is at once loved upon being met, and often states, ‘I love everyone equally, full stop!’, He is often referred to as the ‘most wonderful character’ and ‘the golden hearted’. Wherever He goes, He brings Light and happiness, a very rare loving person.

Written by Viscount Scott Johnson, Secretary of State for Home Affairs of the Sovereign Grand Principality of Sezibwan. Grand Master of the Imperial Order of St. John & St. Mary of Sezibwan.

Reply H.I.H. Grand Prince Jeffery I Rex.
7:30 PM on August 26, 2012
I am deeply moved in my heart at these awards and honours. My deepest thanks to you all. Jeffery.